Picture this: a vast area of stunning, intact wilderness, where grey wolves roam and female polar bears nurture cubs in their dens, where millions of caribou migrate to calve and hundreds of species of birds nest and feed. Where you will find one of the last unspoiled ecosystems in the world and where Donald Trump has now called for oil and gas companies to stake a claim to drill for untapped reservoirs of fossil fuels.

Yes, in the dying days of Trump’s presidency, the future of Alaska’s Arctic National Wildlife Refuge coastal plain hangs in the balance.

Just as the writing is emblazoned on the wall – in Trumpian Twitter-style CAPS – for fossil fuels, the outgoing US president pulls the pin and chucks a grenade into a natural wonder.

The move has sparked widespread condemnation.

“We could see the end of polar bears on the coastal plain of the Arctic National Wildlife Refuge in our lifetimes,” warned Jamie Rappaport Clark from Defenders of Wildlife.

“To promote new oil drilling in the region most vulnerable to climate change impacts is misguided, especially at a time when most Americans are opposed to the idea,” said Margaret Williams, the World Wildlife Fund’s (WWF) Arctic Programme director.

The move is one of the final salvos from an outgoing president who has made it a hallmark of his tenure to dismantle major climate policies, with more than 100 environmental rollbacks to date.

Supporters of Trump’s move hope it may bring badly needed jobs to Alaska.

The American Petroleum Institute said that development in the Arctic is long overdue and that it would work with wildlife organisations and local communities “to safely and responsibly develop these important energy resources”.

But given low oil prices and the expense of drilling in such a remote area, it is not clear how much interest there actually will be in exploration. Plus President-Elect Joe Biden has said he plans to protect the Arctic refuge permanently and ban new oil and gas exploration on all public lands and waters. 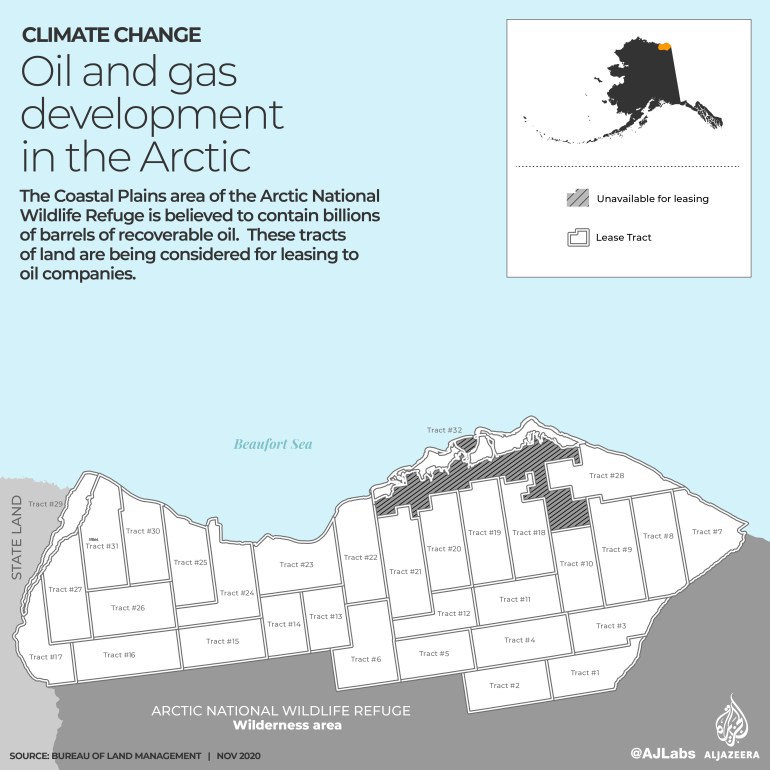 Indeed, the Biden term promises to herald the most progressive climate strategy the US has ever attempted. Signing back in to the Paris Agreement is likely to be one of his first acts as president but while US leadership is critical internationally, it will be Biden’s attempts to cut carbon emissions domestically that will draw most scrutiny.

He aims for the US to achieve net-zero emissions by 2050, promising trillions of dollars of investment in crucial sectors from clean energy to transport, while putting millions back to work in the process.

In 2017, after Trump had just taken office, I spoke to Todd Stern, who had been Barack Obama’s chief climate negotiator. I asked him how he perceived the Trump term to come.

“Don’t worry,” Stern confidently told me. “It’ll just be a blip and then we’ll get back on track.”

In the annals of history, a blip it may well be. But right now it is four lost years in a period when time is on no one’s side.

Ironically, that may ignite the impetus required to remorselessly forge ahead, not endlessly roll back.

We could be on the brink of a revolution in the way we live.

1. Climate group helped Biden win, now will hold him to account: The youth-led Sunrise Movement that helped the US president-elect reach 3.5 million voters in key swing states is determined to make him live up to his climate promises. “We delivered for Biden, now it’s his time to deliver for us,” said Varshini Prakash, the group’s co-founder.

2. The campaigning women of Kendeng: In Indonesia, extractive companies are threatening the lands of hundreds of communities, and resistance is growing. In some cases, it is being led by women who face violence and intimidation in response to their peaceful efforts to protect their culture and homelands.

3. How does Boris Johnson’s Green plan shape up?: As part of its plan to “build back better” after the COVID-19 crisis, the UK government hopes to start a green industrial revolution. What does this entail and will it work?

4. Solar-powered London: Britain’s historic financial centre, the City of London, will soon be powered by thousands of solar panels from a farm in the southwest of England. The project should generate enough green electricity to power the equivalent of 15,000 homes.

To have at least a 50% chance of success (which in itself is an unacceptably high level of risk), we must cut global emissions to half their current levels by 2030, half again by 2040, and finally to net zero by 2050 at the very latest.

Christiana Figueres, The Future We Choose: Surviving the Climate Crisis